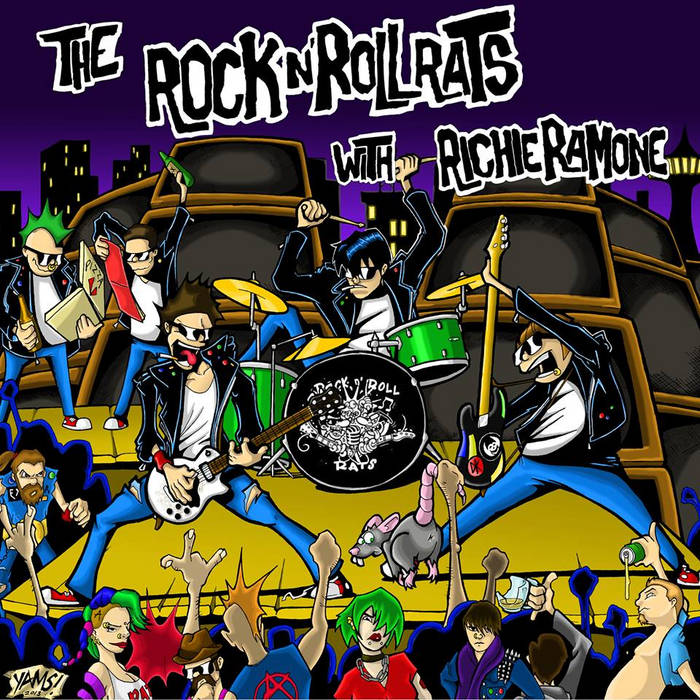 Fresh off of his solo debut "Entitled", Richie Ramone brings the ferocious, in your face attitude that his drum tracks are known for - the perfect accent to the classic punk rock n roll style that The Rock n Roll Rats bring to the table, making The Rock n' Roll Rats one of only a few hand-picked bands to which Richie Ramone has lent his talent.

The new EP showcases 5 all new Rock n' Roll Rats songs written by Johnny Forgotten, the infamous singer and guitar player. Johnny Forgotten delivers honest vocals and guitar, while Jesse Death assaults you with his classic chainsaw bass. Richie Ramone attacks you with a fast and powerful performance that perfectly matches and compliments The Rock n' Roll Rats. Richie Ramone's contribution could ONLY be done by a REAL Ramone (and it is obvious), making this unique release REQUIRED listening for any Ramones fan!

Hailing from Vancouver, Canada, The Rock n' Roll Rats are something of a rare breed: a straight to the point, zero BS, punk rock n' roll band very much in the tradition of The Ramones and The Misfits; blending aggressive punk rock with Marty McFly style rock n' roll like a Sock Hop band on a combination of speed, bourbon, high octane gasoline and American barbecue. Taking influence from old and new alike, The Rock n' Roll Rats have toured relentlessly and have given back to the scene by creating a DIY punk label Empire Records of Canada and recording studio for affordable punk records, but their main goal is to inject a little bit of the classic old school sound that spawned a genre and changed a generation into a music scene filled with schtick and gimmicks. It's not a costume to them, nor an act; it's a way of life even down to their tour convoy, consisting of a 69 Triumph Bonneville, a 75 Dodge Special Edition, and an '84 Cadillac DeVille Hearse.

Available now on interpunk.com, make sure to pick up this limited release featuring Richie Ramone while supplies last! Truly a must have, whether you're a die hard Ramones collector or just a rock n roll fan looking for that old style from a new all-original band, this release is for you.

Please contact us anytime for an interview or more information at:
booking@therocknrollrats.com
604-440-7880

Bandcamp Daily  your guide to the world of Bandcamp